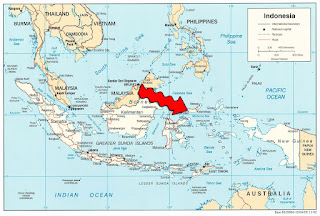 The tremor hit at 12:02 PM ET, striking about 135 kilometres northwest of Gorontalo, Sulawesi, one of the four largest islands of Indonesia.

The quake and subsequent tsunami warning, which has since been lifted, caused residents to flee nearby coastal towns.

However, there are no immediate reports of injuries or damage.

Indonesia's local geological survey measured the earthquake at a monstrous 7.7.

Indonesia's location along the so-called 'Ring of Fire,' an area of volcanoes and fault lines in the Pacific Basin, makes it particularly vulnerable to earthquakes.

It was a 9.1-magnitude earthquake, the fourth-largest in more than 100 years, that hit the Indonesian island of Sumatra in December 2004.

The earthquake and subsequent tsunami, which affected 14 countries, killed more than 200,000 people and displaced nearly 1.7 million others.

Take a Mentawai Surf Trip >>>
Posted by Jason Hennessey at 11:11 AM No comments:

Jason Hennessey
Surfing, Skateboarding and Snowboarding are my boarding sports.